Platinum – Part 2 of a 2-Part Presentation

The global supply of platinum (and PGMs) depends heavily on the South African PGM industry. South Africa supplies some 73%, 37% and 82% of global platinum, palladium and rhodium respectively. South Africa produces c.4.5moz of the c.6.1moz of global production (JM).

The market is of the view that there is an increasing risk of a decline in supply from South African PGM mines as shafts/mines are reaching the end of their life and/or have become economically unviable.
In addition, the industry has faced numerous challenges in the past caused mainly by the combined effects of prolonged industrial action and electricity shortages, increasing costs, a significant reduction in capital expenditure, and a negative legal and political environment (Section 54, Mining Charter). The industry is currently experiencing daily and prolonged electricity outages, which has a negative impact on the primary supply of PGMs.

I am of the view that these risks, particularly electricity outages, will not abate for at least five years. Under these circumstances, the risk to the supply of PGMs from South African mines is to the downside. In this regard, the negative impact on supply will put upward pressure on PGM prices (repeating past experience).

In this review, I have discussed those factors that in my view, will likely accelerate PGM demand and in particular the demand for platinum. In summary, and for clarity, I reiterate my view that the demand for PGMs has been and will continue to be driven by progressively tighter vehicle standards through regulation worldwide. In response, vehicle manufacturers have had to increase the content (loading and loading ratios) of palladium, platinum and rhodium (PGMs) in autocatalysts to meet the stricter limits, thereby progressively increasing demand. Vehicle manufacturers have shifted significantly to the introduction of electrification, hybrids and FCEVs in an attempt to comply with tighter emission standards.

The increase in demand for platinum was, however, constrained “twice” during the intervening period. Firstly, by the substitution of platinum for palladium in petrol autocatalysts and partial substitution of platinum with palladium in diesel autocatalysts. Secondly, by Dieselgate, which resulted in a loss of diesel market share from 2016, which, in turn, had an impact on platinum demand. In this regard, autocatalyst demand declined by -2.3% (CAGR) between 2007 and 2019f (JM). In comparison, palladium autocatalyst demand increased by 6.7% (CAGR) over the same period.

In my view, it is inevitable that petrol and diesel internal combustion engines (ICEs) will likely be phased out faster than generally expected and will be replaced by BEVs and FCEVs and a combination of hybrid vehicles. Figure 6 illustrates my forecast of the “phasing out” of ICE vehicles and the “phasing in” of BEVs, FCEVs and a combination of hybrid vehicles (EU and EFTA).

I am of the opinion that it is important to gain a “sense” of the quantum of the possible annual increase in platinum autocatalyst demand by 2025. It should be noted that this demand is likely to increase exponentially as ICE vehicles fall away and hybrid, BEVs and FCEVs gain market share.

Stepping into the “minefield” of “simple forecasting” my calculations indicate that by 2022 and 2025 additional platinum demand of around c.300koz and c.1.0moz respectively will be required. These figures were calculated at a high rate of decline of ICE vehicles. It should be noted that these figures only give a “sense” of the quantum for the exponential acceleration of platinum demand. 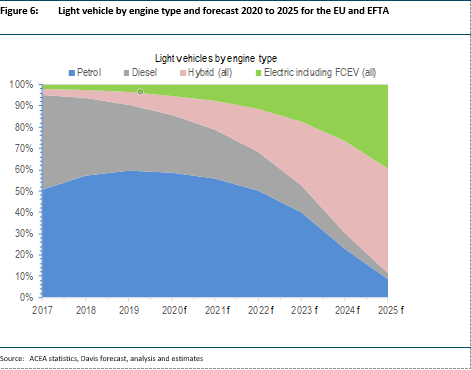 The supply-and-demand fundamentals for platinum are difficult to unpack when compared to the supply-and-demand fundamentals for palladium. Figure 7 illustrates the market balance for platinum and palladium respectively (JM). On the macro long-term level, platinum has exhibited an average annual net market balance deficit of some c.110koz and a total deficit of some c.1.45moz between 2007 and 2019 respectively (JM data). Significant deficits are noted between 2013 and 2016. In 2013, the market deficit increased to around c.800koz, mainly due to an increase in investment and gross platinum demand. In 2014, a deficit of around c.700koz was recorded due mainly to a loss in supply of over c.1.3moz of platinum production following a five-month strike at major South African mines. In 2015, the market deficit decreased to around c.400koz, mainly due to growth in autocatalyst and investment demand. As indicated above, Dieselgate precipitated a backlash against diesel resulting in a loss of diesel market share, which, in turn, had an impact on platinum demand.

I note, that both platinum and palladium have reflected annual deficits, which suggests both metals are exhibiting supply imbalances, yet the price of palladium has sky-rocketed and the price of platinum has been in free fall. Plainly, this situation is incongruent and flies against all financial norms. Financial markets are unlikely to misprice these metals ceteris paribus. I attribute much of this phenomenon to negative market sentiment towards platinum, given its history. It is interesting to note, that JM had a similar view: reporting that “the platinum market suffered from negative sentiment and falling prices in 2015, but demand trends were broadly positive”.

I note that Sibanye-Stillwater anticipates a market balance surplus until 2022 and thereafter to revert to a continuous deficit which becomes considerable from 2025.

As indicated above, the supply-and-demand fundamentals for platinum are difficult to unpack and present. Most market research organisations present a complicated table of supply and demand, which results in a market balance figure at the bottom of the table. Figure 8 below illustrates a simple and unique presentation of supply and demand using JM statistics for 2019F. This presentation allows the reader to visualise the components and quantum of the supply-and-demand equation and readily understand how the market balance is calculated. 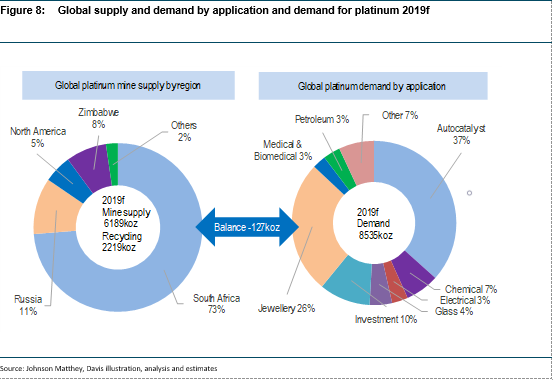 Throughout this discussion, I have alluded to a number of factors that will put upward pressure on the price of platinum. This upward movement in the price will likely be supported by the combination of a number of market indicators characterised by strong consumer demand and tight physical availability, coupled with a continuous supply and demand market balance deficit after 2022, which accelerates from 2025. The price is, however, likely to trend upwards, with some volatility, prior to 2022.

In my view the platinum price is primed for better days: