Financial institutions and traders are leveraging into short gold, silver, platinum against US$ on the futures exchanges to make the most of an opportunity (stronger US$ globally), while capitulation of long positions by investors who do not fully understand the market structure is forcing lower prices.

In the just-released CFTC data for the week ended Tuesday, speculators went net short for the first time since December 2001 when gold was priced at $275 an ounce. It’s tough to find a more contrarian indicator.”

In fact, as of the latest week – both Gold and Silver futures are now net short… 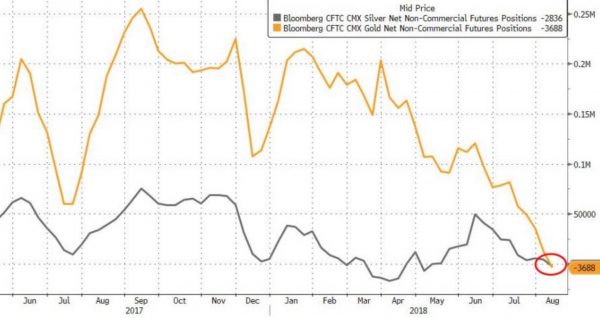 Believe it or not this is incredibly bullish in the bigger picture, the whole construct of the futures market is moving to one side of the boat (short gold and long US$), this distortion cannot last and is also pushing silver and platinum below all-in-cost global production figures, further pushing the global producers to cut back on production due to huge losses and further aggravating the global supply-demand physical deficits. Silver is already recording lower global production from last year and over the next 5-years is accepted globally that mine production will experience large falls, while industrial demand is actually growing strongly.

Platinum meanwhile has crossed a line, which is presenting an enormous opportunity – this I will write about in a further email this week.

In fact, paper leverage is recognised at all-time highs, for example, the number of “paper” silver ounces traded on the major world silver exchanges divided by the actual world production of silver in ounce is over 180 to 1, gold is over 88 to 1.

Understand what is happening globally to fully comprehend how to protect your wealth in the coming years ahead.

The perfect storm continues to escalate, the centre of this storm or ‘for want of a better word’ the cancer driving this global crisis is the Global Debt Crisis that has a mathematical and immutable destination in morphing into the final Western Sovereign Debt crisis.

The headlines in the press are presently focused on Turkey, China’s Yuan currency falls and the rise of the US$ in FX markets.

But you have to understand that all of these events have been predicted with clarity for many months and years, not only in my writings and conversations but more importantly by the serious macroeconomic forecasters, traders, cycle analysis and also signalled by world authorities (IIF, BIS, IMF, World Bank etc.).

The panacea by world monetary authorities to the GFC ( Global Financial Crisis ) of 2007 to ‘09 had major long-term negative repercussions which effectively is going to lead into an ever greater crisis which we are now beginning to experience and recognise as the 320-year cycle ‘perfect storm’ …. 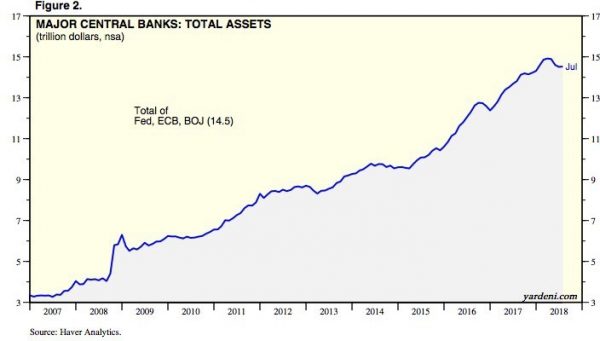 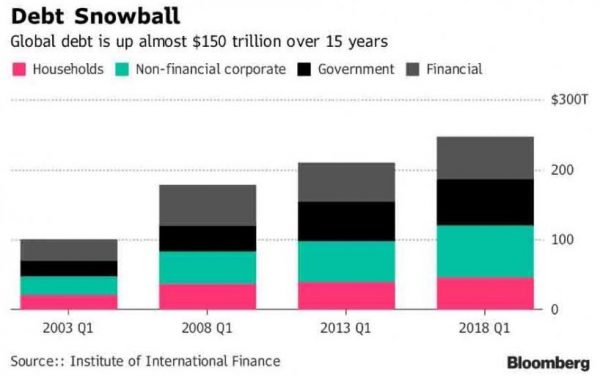 How is this going to play out?

Global Interest Rate falls led by the USA – Which instigated the largest carry-trade ever historically recorded in world markets. Effectively the world borrowed in US$ from the year 2009 to fund the growth expansion in their home countries (converting the US$ borrowed into their domestic currency), in the knowledge USA interest rates where near zero and would remain so for an extremely extended period and the US authorities supported a soft US$ currency stance.

Now…. The USA is experiencing a debt-leverage supported GDP expansion and employment growth and hence raising interest rates and also instigating QT (Quantitative Tightening) which is a shrinking of money supply, this is compounding the debt stress on the likes of Turkey who suffers from a Balance of Payments deficit imbalance, in fact its reported over 30 countries globally are suffering from severe imbalances.

The higher the US$ the worst it gets, it’s like a snowball effect. The higher the US$ the more the world has to buy US$ to unwind their US$ debt exposure (20 trillion US$ has to be bought to fully unwind). The US$ is going to continue to rise on FX markets, compounding the global debt crisis and pushing emerging markets into crisis, currency collapses, currency induced high inflation, banking crisis etc..

I wrote about this phenomenon in March of 2015 predicting the eventual rise of the US$ and why this was going to be the case, little did I know at that time the carry-trade would continue to expand into a grotesque 20 trillion US$ monster.  To read this article

9 Trillion US$ Carry Trade That May Take The World Economy Down. What Is It Exactly?

Europe is a dead man walking – Will Italy be the final nail in the coffin?

This week the chairman of Italy’s budget committee stated with frightening honesty that the country’s bond market will spin out control as soon as the European Central Bank stops buying its sovereign debt.

“The bond spreads will widen dramatically. The whole situation is unsustainable without an ECB guarantee, and the eurozone will collapse,” said Claudio Borghi.

Understand this is a greater threat to European banks (who are already recorded as completely insolvent) and global finance than little old Turkey. The ECB has already pre-announced that it will halve purchases of eurozone bonds to €15bn (£13bn) a month in October, and will stop altogether at the end of this year 2018.

Italy’s eurosceptic alliance have stated they would immediately activate its “minbot” parallel currency and subvert monetary union from within. “The minibot is part of their official programme, they propose the restoration of the Medici Florin as the new patriotic coin of Italy rather than suffer the depression of a debt crisis under the strict constraints of Europe’s policymakers.

“It is not only Italy that will be in trouble. Who is going to buy a 10-year Portuguese bond with a lower yield than a US Treasury, when there is nothing standing behind Portugal ?”

Currency weakness derived from inflation is feeding into the system and will only rise, thus compounding the debt problems.

Housing markets – Are now cracking globally, be it in London, Singapore, Sydney and now Hong Kong.

In a debt crisis interest rates rise substantially and very quickly while the availability of credit dries up, and with the final housing bubbles globally recorded at house-price-to-earnings ratios of all time nose-bleed highs mixed with extreme debt leverage (Hong Kong 19 to 1, London 14.5 to 1, Sydney 13 to 1, etc..), the direction of property is clear for all to see, especially considering banks are now unable to continue their debt lending expansion.

As I have said over the last 24 months the US stocks markets are going to benefit from the wall of money being re-directed into the US$, not only from the unwind of the carry-trade but global flows are recognising the change of momentum. Money is simply not going to sit in banks in the USA, it has to go somewhere and US debt markets are not going to be beneficiary.

Hence the S&P500 is very soon going to be recognised as the longest bull market of the last 100 years, all these bull markets ended very badly, however, do not mistake me – I am not calling for a USA stock market collapse as this debt crisis is a once in 320 year cycle and hence driven by differing dynamics, but you should be aware of this historical precedent and be warned….. 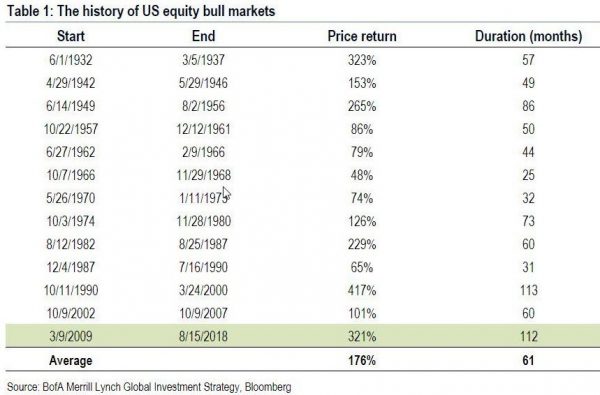 Conclusions, with a focus on metals

The US$ will continue to appreciate on world markets, though obviously not in a straight line and with great volatility, this crisis will culminate in a devastating US$ rally which causes extreme pain to the global borrowers of US$.

Precious metals – The initial repercussions of this rise in the US$ on FX markets is lower metal prices against US$, although in Sterling, Euros, Yuan or other world currencies the gold price will hold a lot stronger …… 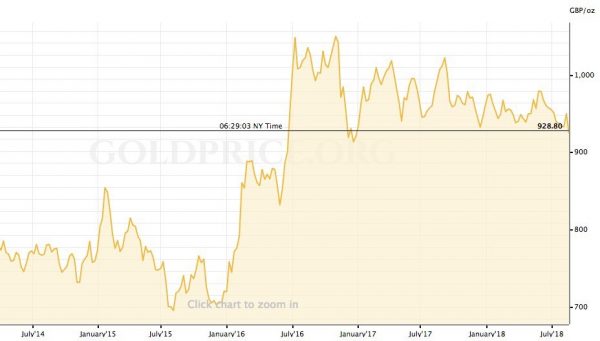 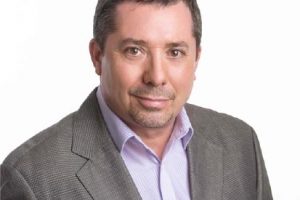 David Mitchell is a friend and respected colleague of Gold Bullion Australia.
David has nearly three decades of experience in the financial markets working for some of the world’s leading international banks.

Some of his most notable roles have been Head of Proprietary Trading, Europe and Head of Spot Trading, Asia-Pacific for HypoVereinsbank AG; Chief Dealer and Manager of the G10 Desk for HSBC; and Chief Dealer at the Forex Desk for NationsBank Group, Singapore.

David brings his expertise and energy to the role of Managing Director of Baird & Co Asia, and Founder and Non-Executive Director of Indigo Precious Metals.

IPM Group, indigopreciousmetals.com has a presence in Singapore and Malaysia and trades in physical precious metals. Its primary focus is the supply and physical delivery of investment grade precious metals directly to customers.

David is a skilled economic writer, he produces regular commentary to demonstrate his views on precious metal investing. His articles and reports are insightful, full of factual data and references and are a valuable source to assist with investment decisions. David mixes his connections, experience and analytical mind with an entertaining and explanatory writing style that is enjoyable and easy to read.

I approach my long-term trading strategies from a knowledge based on how all markets and assets classes are inexorably linked to each other within major cycle trends in capital flows.

How GBA and David Mitchell work together
The team at Gold Bullion Australia enjoys regular communication with David Mitchell in several ways:
– David shares his views on precious metal investing with commentary, team training and regular updates about the fiscal environment, Macro Economic drivers and supply and demand scenarios affecting precious metals.
– IPM and GBA work closely in offering solutions for investors to trade and store precious metals including offshore vaulting of Palladium and Rhodium.
– David has recently been appointed Managing Director of Baird & Co Asia and hence a partner of GBA who is an official distributor of Baird & Co in Australia.